What is the Gilded Tarot? It is a visually stunning Rider-Waite style Tarot created by the talented Ciro Marchetti. Such a beautiful modern deck featuring digital images, these cards have a mix of medieval, fantasy, cosmic, and steampunk art – all are illustrated in lush, vivid color. In this version, Marchetti combined both traditional style and mythological, mystic elements to emphasize the deep meanings hid behind each delightful image. Do you want to learn more about this stunning deck? Take time to keep track of the “Gilded Tarot Card Meanings” article. Much info is waiting for your self-exploration!

If you feel bored with the old style of Rider Waite Smith deck or are seeking a familiar deck that will take you into the future, the Gilded Tarot is the best choice for you. You must see the cards to believe their actual beauty – the colors are deep, intense, and almost metallic. When buying this deck, we recommend you to also purchase ‘The Gilded Tarot Companion’ book (written by Barbara Moore) for full instructions in detail.

Brief Review of the Gilded Tarot 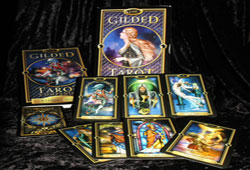 Wondering what types of Tarot decks suit you? Maybe the Gilded Tarot is the deck you want to use. As you all know, the Tarot is very personal and all the cards here are packed with many insightful meanings. When doing your own reading, instead following every word in the guidebook, your intuition is the final decision. Discard all the negative thoughts in mind to achieve the purest, most delightful session. Keep practicing until getting the meanings of all the divination cards with a glance. Always prepare a handy journal or notebook to take note important details. Read the guidebook carefully as it provides exercises helping you solidify your understanding of the cards.

78 cards seem like a lot to learn. According to Gilded Tarot Study Guide, you should divide the deck into two main sections to make the whole process easier: the Major Arcana (22 cards) and the Minor Arcana (56 cards). ‘Arcana’ means secrets, so the Major Arcana is believed to keep the ‘big secrets‘. In practical terms, the cards represent major changes, important milestones, spiritual growth, and events beyond humans’ control. The Minor Arcana – ‘lesser secrets‘, on the other hand, generally describes situations, events, or people related to daily life.

*An important characteristic of the Minor Arcana is – the cards represent different aspects of your life over which you have the control (shortened as personal control).

Interestingly, Marchetti is always known as a card collector, so his purpose of making this deck is mainly for Tarot collectors. The Gilded Tarot, unfortunately, may not be considered as an efficient tool for many professional Tarot readers, especially with those prefer not to mix divining with technology. This deck may also be good for people who interest in the symbolism of the Rider-Waite deck or Rider-Waite clones. Besides, anyone who’s into technology, astrology, and nature could enjoy using this deck, as well as those that are big fans of Marchetti’s artworks.

It’s good to know that Marchetti adapts Rider-Waite ideas well to fit his own beliefs in this deck. The Gilded Tarot is such a good job from him; amazingly it was his first Tarot deck. For further information regarding the “Gilded Tarot Card Meanings” subject, leave your comments in the chat box below.