Home » YES or NO Tarot » The Magician Yes or No Meanings: What Should You Know?

This is the tarot card symbolized by the Roman number I which has the meaning of one’s personal identity – I and I’m. The Magician in this card takes advantage of his energy, gifts, skills, and the world surrounding as a rich resource.

It represents the source of strength and guidance to accomplish the purpose found in The Fool. Besides, it also describes what a person has been through in the natural process called self-development.

So, what does The Magician yes or no mean?

Check it out here!

Interpreting The Magician Yes or No Card 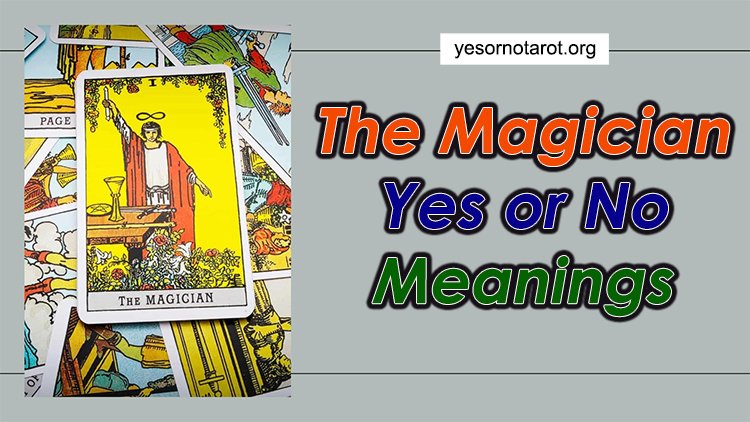 See also: The Lovers as feelings in a reading

There is a man (or woman) standing with one arm straight up and stretching towards the universe, while the other arm is straight down towards the earth. His (her) position represents his (her) interconnection between the spiritual realm and physical realm.

The magician’s red cloak symbolizes the experience and knowledge, and his (her) white outfit inside denotes the purity.

In front of him, there’s a table on which he (she) places four symbols of the Minor Arcana: a cup, a pentagram, a sword, and a wand – representing four elements: water, earth, air, and fire – used in his (her) rituals. The magician is holding his tool carefully because he’s aware of the spiritual power. He can manifest his intentions into reality.

See an infinity symbol above his (her) head? Around his waist, you’ll find a snake biting its own tail as well!

Both are the sign that the magician has the possibility to unlock his (her) infinite potential. In addition, he (she) is standing in a garden full of flowers meaning that the emotions and creativity we feel in life need to be nurtured and later we can reap the fruits of them.

The Magician is a powerful personal symbol that anyone in life needs.

Red and white flowers: An alchemical symbol of masculinity – positive (active) – and femininity – negative (passive). The interaction between these two creates energy to the universe.

A table with four symbols of the Minor Arcana: These objects represent the magician’s resources.

3. The Magician is yes or no…or maybe?

Undoubtedly, this card has positive meanings so it means a clear ‘yes’.

As it’s all about willpower, manifestation, and desire, you’re likely to gain the ultimate encouragement when getting The Magician during a general tarot reading. Moreover, if you are considering about whether or not you should move forward with your plans, this card is a confirmation to continue what you are doing.

When it comes to love, the Magician also means ‘yes’. Once seeing this tarot card, tell yourself that it’s a sign to do anything. At this phase of your life, everything is possible and worth trying. Take this chance to become the creator of your own reality!

Read also: The Hanged Man yes or no meanings

The Magician represents a person who is learning, receiving, and applying the necessary skills for what he is doing.

He is smart, adaptable to all aspects of his work. It seems that his ingenuity will help him gain loads of resources to support his work at the moment as well as in the future. This card emphasizes the importance of equipping yourself with skills, especially if you want to achieve your goals and get promotions.

The Magician is the most ideal type in love.

He knows his abilities well and enables to show them skillfully. His magic will bring the two involved together. It is the mutual attraction, understanding and sympathy. The Magician also gives a sign that you are completely falling for your partner.

The only thing to improve is that you seem to have a pretty high ego. Sometimes love is not about winning or losing; as a wise person, everything is under the control of the magician.

This tarot card indicates a good opportunity that you should snatch to gain more insights into the spirituality realm. Are you gradually realizing the universe’s rules? If yes, remember them. Those are the resources of the magician!

The initiative and endless potential are the strengths of his.

Maybe you will soon meet a teacher or friend who seems to have a spiritual connection with you. This card is a positive signal, indicating a favorable time for you to carry out what is on your mind.

When reversed, the magician can imply human’s greed, deception, manipulation, or taking advantages of others for malicious purposes. It also reflects trickery, unreliability, and mental disturbance.

This card means right now you are departure from reality and struggling to get yourself back to reality. You may be facing confusion and lack impatience. It’s time to free yourself from your current situation to re-create your perspective and re-evaluate your own image.

So, what does the Magician yes or no imply in a reading?

It denotes the original power of creation is yours. If you are aware of your power and act with alertness and concentration, this card is the confirmation. As long as you understand exactly what you want and are dedicated to achieve it.

When you pull it upright , The Magician definitely conveys a ‘yes’ as an answer to any your question. But, in reverse, the meaning will completely change and The Magician now means ‘no’. Fortunately, when it comes to love and relationships, this card is the ‘yes’ indicator.